On 29 September 2019 RUOTKER'S was opened under the title "house of whiskey, gin & rum" in Riegersburg. Over the course of the Styrian Autumn; which is famous for culinary events, the new second generation store of the Gölles family was furnished by umdasch The Store Makers. The store, full of classy spirits, shows full taste from body to texture. Following the realisation of areas for Zotter chocolates and Gölles Manufaktur, The Store Makers have demonstrated further competence in the design of gastronomic areas with Ruotkers House of Whiskey, Gin & Rum.

You've guessed it! Body and texture are technical terms for whiskey and rum tastings and with a little imagination these technical terms can also be used for shopfitting. Such connections can be found everywhere. In fact, researchers at the University of Oxford have found that the environment in which you are in has a significant influence on the perception of taste in whiskey tastings.

The Spirits and Senses World was built on 500 m2 in a former guesthouse near the manufacturing facilities and the hotel's own “pleasure hotel”. For the planning of RUOTKER'S, The Store Makers at umdasch advised the architectural team and subsequently took care of the production and installation of the furnishings. For the owners, David Gölles and Katharina Fleck, it was particularly important in the design process that the old character of the building was interfered with as little as possible and that work was carried out using local materials and trades firms - a requirement that The Store Makers ensured they adhered to. 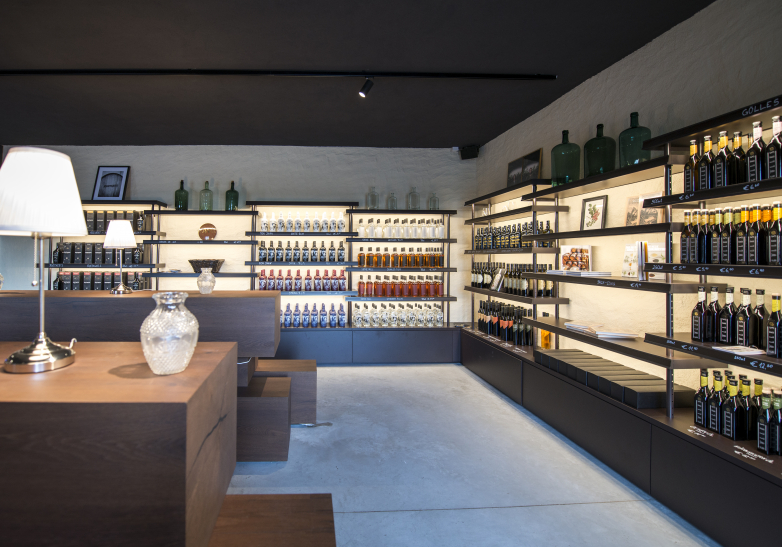 In addition to the realisation of all furniture in the showroom, the store makers from umdasch also pursued their core discipline and set up the shop where visitors can buy the fine wines from RUOTKER'S and products from Gölles Manufaktur. Ornamental and airy yet functional shelves were installed here to present the products with optimal presentation dramaturgy. The dark colour scheme of the interior design was conceived with the Aberjung office. It sets the scene for the whiskey and barrel storage theme perfectly. Oak wood, concrete and metal are the predominant materials. Not everything has been polished to a high gloss - corners and edges are left to their natural state in many places, which is completely in keeping with the David Gölles' nature. Elegant and charming details create a warm feel-good ambience, such as the velvet and leather furniture in the lounge. 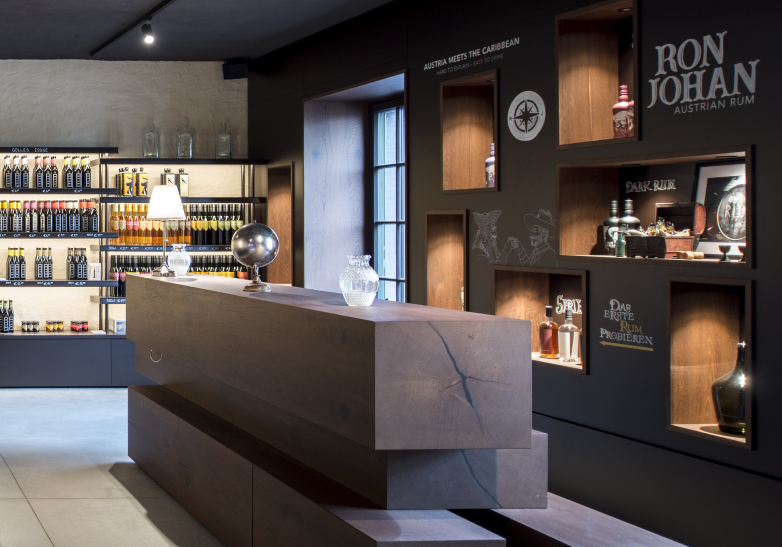 A large glass showcase is a space-enhancing element and presents the whiskey bottles centrally on the surface, purposed as a solid shelf that nevertheless appears discreet and transparent. An especially impressive element in this store is the barrel storage, which adds to the overall ambience. The whiskey barrels are stacked not only in the cellar, but also in the middle of the catering area on the ground floor. The result is a stylish room teeming with a dark and rustic atmosphere. 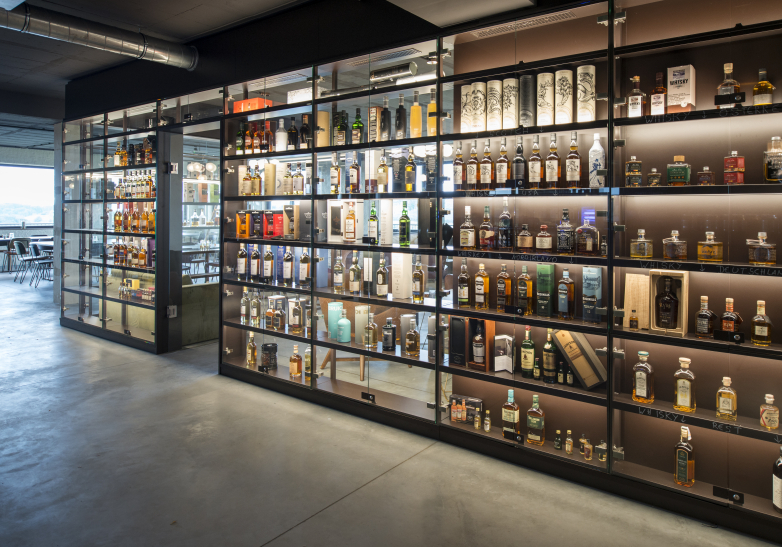 A further eye-catcher lays in the middle room. Furniture made of bulkey beams of squared lumber, double their functionality for presentations and tastings. They also extend when necessary and have inbuilt, hidden drawers. The natural feel structures nestle into the room perfectly and contrast the stern looking, black painted ceiling. This furniture can also be used as a counter for the casual bar, where visitors have a great view of Riegersburg Castle. The gastronomic competence of umdasch was demonstrated here with the harmonious integration of all appliances into the room concept. 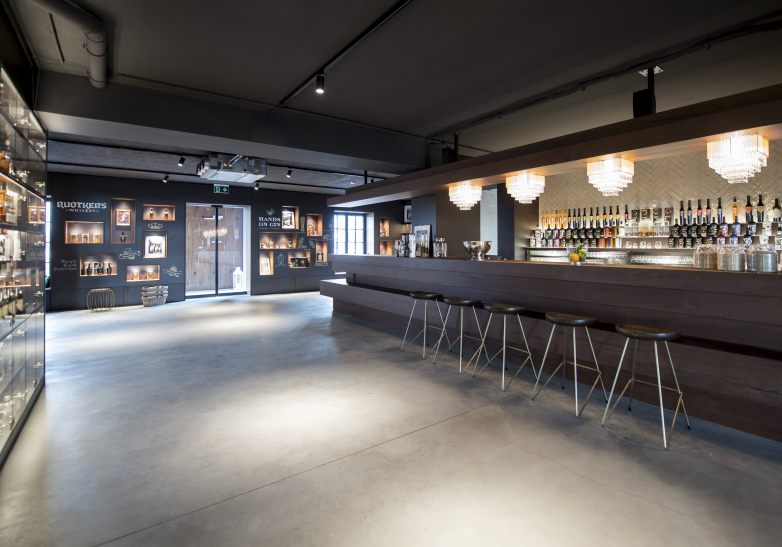 The world of the senses is rounded off by wall coverings with playful details such as lettering or individual outlets for product presentations and decorative objects such as antique distillery elements to loosen up the overall picture. 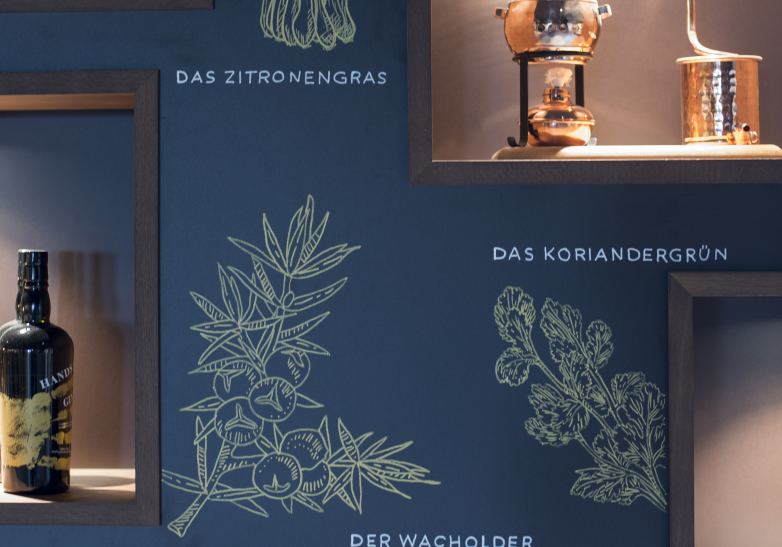 The barrel store is the heart of RUOTKER'S house of whiskey, gin & rum. The 600 m2 area with a room height of six metres offers capacity for over 1,000 barrels, which are stacked in four rows. 600 barrels filled with the finest spirits are already stored in the cellar. 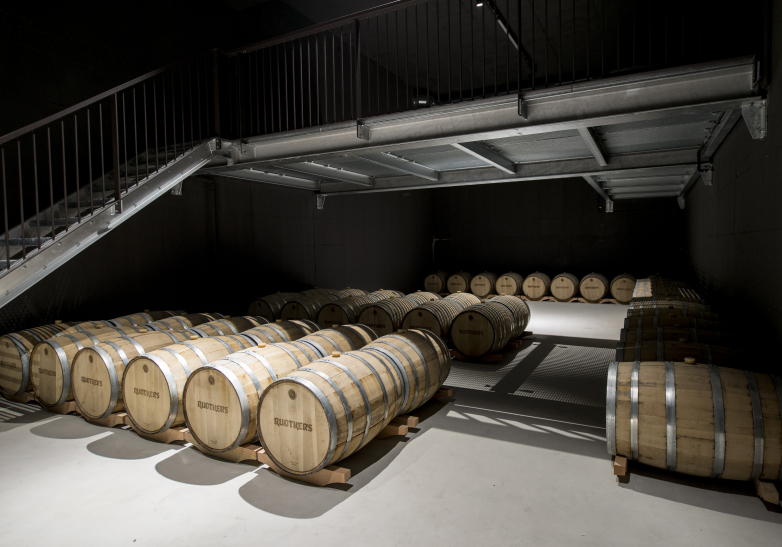